What Do You Think About The Tea Party Protests in 2009? 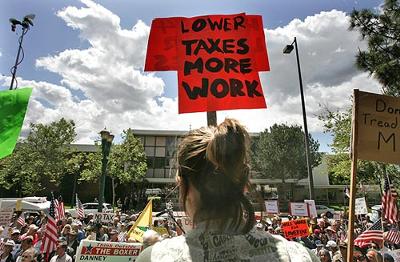 Many "tea parties" sprang up across the nation this Tax Day to protest President Obama's policies.

The irony of these tea parties, in remembrance of the Boston Tea Party in 1773, is that there have been across-the-board tax cuts for all Americans except a small percentage at the top. Some protesters acknowledge the seeming antithetical nature of a tax protest in the face of tax cuts and claim to protest the White House's support of congressional bank bailouts and likelihood of future budget deficits.


Over 1,600 LA Times readers shared their opinion of these Tax Day protesters and their displeasure with governmental policy.
DLounsbury said: As a self-employed business man I get doubled up on my FICA taxes and pay 45 cents of every dollar I make to the federal government. That does not include state tax, property tax and the many "fees' for just about everything. After all is said and done, I work frm January to July before I am earning my money. You are out of touch if you think that is not worth protesting.

TKell said: Nancy Pelosi was elected by the insanity that you are describing. It's not just about taxes, it is about out of touch Congressmen spending OUR trillions of dollars and not even reading the stimulus bill. They were in a hurry because Obama wanted it passed by his arbitrary deadline. Question: would you ever sign a contract without reading it in its entirety? Congress is proceeding on its merry way, having a party while this country is hurting. Listen up--we are tired of business as usual in DC. It has to end. It is NOT about Republican v. Democrat. I was at a protest today and there was both shouting 'USA'.

Tracy said: This sophisticated administrations spending makes "W" look like a tightwad! Most of us were outraged with George's spending, we should have spoke up. Obama et al is doubling and now tripling down on the expenditures. Taxes may not be so bad now but what about after 2010? I think we are sophisticated enough to get the future picture Marc - I think you have some catching up to do! You might want to dial up some "Talk Radio", those guys will get you up to speed! We have our bearings Marc - you just don't like them. Your "sophisticated" posturing exposes your own ignorance.

cleudaly said: Evil maybe but certainly not necessary. Banks continue insolvent. Unemployment, foreclosures still rising so Americans are not keeping their jobs and their homes. Their retirement is already gone. The bankers have still got theirs tho. They didn't think of the typical American family Republican, Democrat or otherwise, while they were running their scams, ala Madoff, with the help of the feds over the last 15 years. That which is crooked cannot be made straight, not for all the tea in China.

Some opinion from those on the other side of the issue after the jump...


Philzy said: This country has been going "socialist" for over a hundred years. People complained when social security was introduced in the 30's. The tea-partiers are the same folks who never complained when Bush spent a trillion dollars in Iraq on a pointless war. Now, see how they parade out their kids on the curb to make a political point. Those kids will be grateful when they grow up and have a decent public education and a well-paying 21st century career. All they'll remember their parents doing is being a follower of the bigmouth Limbaugh.


JWLChicago said: Actually, I am a proud Democrat, and went to one myself. It wasn't anti-Obama, it was about trillions of dollars that Obama and Republican and Democrat and Independent leaders have signed away, WITHOUT READING THE DAMN BILL, in our name! This was a rainbow coalition by the way, of Dems, Republicans, Independents, Joe Sixpackks, Gay's like me, black, white, latino, men and women! You obviously didn't go to one to find out for yourself you poor excuse for a journalist....so you are just regurgitating the same shmuck that commentators...not journalists, schill out for the mindless like you!

Do you think the Obama administration's policies are worthy of protest? Are the massive bailouts of banks and insurance companies a necessary burden for future generations or not? Should we consider letting certain institutions fail instead of forking over big bucks to pay for their mistakes? Will this Congress be remembered for reckless overspending or guiding the country out of a depression?