Abuse in the Workplace 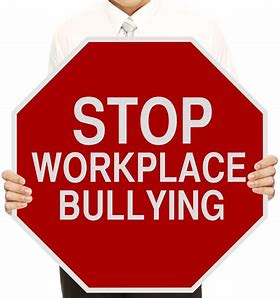 Abuse In The Workplace

Verbal abuse creates emotional pain and mental anguish. It is a lie told to you or about you. Generally, verbal abuse defines people telling them what they are, what they think, their motives, and so forth. Most people targeted by verbal abuse explain why what they've just heard is not true or not okay.

They explain themselves because they believe the perpetrator is rational and can hear them and the relationship will then get better.

Then they usually hear more verbal abuse, for instance, "You're too sensitive." At that point they don't usually realize that they have just been defined, and, therefore, verbally abused again.

Since the target of verbal abuse is often blamed, ignored, or yelled at, s/he may have difficulty recognizing just what is going on in the relationship.

Emotional abuse is a series of repeated incidents - whether intentional or not - that insults, threatens, isolates, degrades, humiliates, and/or controls another person.

It may include a pattern of one or more of the following abuses: insults, criticisms, aggressive demands or expectations, threats, rejection, neglect, blame, emotional manipulation and control, isolation, punishment, terrorizing, ignoring, or teasing.

Survivors of emotional abuse often have a hard time understanding why they feel so bad. The abuse may not sound like much, and often people around them will minimize the experience, telling them it's not so bad.

But a climate of disregard for a person's feelings, where one is subjected to constant or frequent criticisms, being yelled at, or being ignored - has a deep and profound effect, attacking the very self-image and confidence of a person.

How do you recognize emotional abuse? One thing that can help is to step back from your situation and examine the overall climate in your home or your workplace.

Trust your instincts and feelings about people. Sometimes, a person can just look at you and you know that they are looking down at you. Other times, their words are okay but their tone is mean.

Emotional abuse is insidious and can be very subtle, so trust your gut; it's telling you something.

No matter what you've been told or how you've been treated, you are worthy of love and respect. The more you know this, the less likely you will be to accept disrespectful or abusive behavior towards yourself or others.

You should not have to take emotional abuse from anyone - no matter what the excuse. You deserve to be treated well.

Join in and write your own page! It's easy to do. How? Simply click here to return to Articles.